It's been a long time since my last post...more than a month, in fact!

It has been an event-filled month. Unlike when we adopted Anand, and stayed in Bangalore for more than two months while the process of adoption got underway, this time I have not been able to get away from work for such a long time.

And so, Arpita and the kids had to stay in Bangalore, while I returned to Vellore. That was a difficult period of time for all of us. Finally on the 30th, they were all able to come to Vellore.

Let me also quickly say a big Thank You to all at 69, Hutchins Road, who have done so much, and put up with so much, and rearranged their own lives around ours, so that this time could be more pleasant and easy for us.

Namrata is growing well and it is such a joy to watch her. She is one of the most cheerful kids I have ever met, and has the cutest smile. She is now beginning to sit up, and pivot around to reach out for objects. She makes loud conversation, and laughs out aloud when amused. She does not require much entertainment, and can keep herself occupied, even just by staring at her toes! She has got over her initial respiratory infection, and is now eating well and putting on some weight. 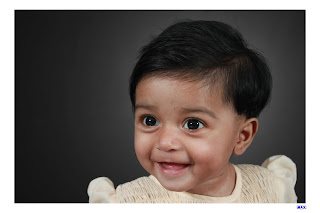 Anand has taken the changes very well. He had been praying for many months that God would give him a 'smiling sister' and is relieved that God answered his prayers! He tells us often how much he loves his sister, and is very sure that she loves him too. There have hardly been any of the 'elder-sibling' problems we had heard so much about.

He also seems to have grown up an awful lot over the past one month. He has now entered the "Why?' phase, and we are often scrambling to answer his 'whys'. While reading a book to him, he now stops us if he does not understand something, and makes us explain what we just read, and the meaning of difficult words. When he has been satisfactorily answered, we are told, "Okay, read!", and meekly continue reading to him.

Arpita is now recovering from a bad viral infection that left her quite drained. Since I am so busy at work, she has been managing the children and the house all by herself, and always amazes me at how she manages to find the resources to keep things going so smoothly. Both of us are struggling to find a new rhythm and routine, and to juggle all our various responsibilities without missing out on what is most important. 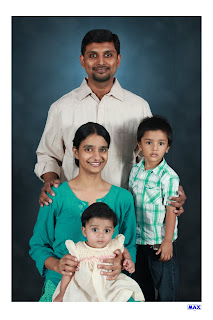 Our papers have now been filed in court, and the adoption process moves slowly along. This is our most recent family photo that we have submitted with our papers. Unfortunately, the photographer could not get the kids to smile...

Thank you, each one of you, for your love, and care and concern for us, expressed so frequently, and wonderfully, and in so many ways. We are so blessed!
Posted by Pradeep at 11:00 PM No comments: